Finally, Some Prolonged Cold Weather May Wrap Up February, Kick Off March in the Midwest, South and East 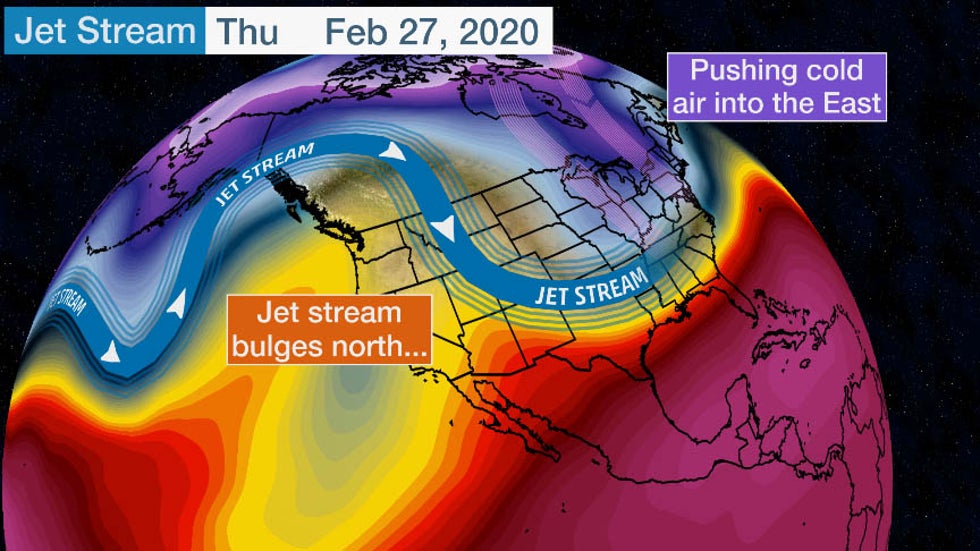 A northward bulge of the jet stream over the North Pacific Ocean near the Gulf of Alaska is predicted to drive more persistent cold air into the central and eastern U.S. from late February into early March.

It took the entire winter, but an upcoming pattern change might finally bring more persistent cold air to the Midwest, South and East as February ends and March begins.

Dozens of cities east of the Mississippi River were reporting one of the 10 warmest winters to date from Dec. 1 through Feb. 18, according to the Southeast Regional Climate Center. That's because the polar vortex has been unusually strong for most of the season, keeping the arctic air locked in across the polar regions rather than plunging southward into the United States and persisting.

In fact, on Monday, the polar vortex was the strongest on record for Feb. 17, and it was projected to maintain record strength into early March, according to Simon Lee, a meteorologist and Ph.D. student at the University of Reading in England.

With a record-strong polar vortex locking the arctic air into the far northern latitudes, any sustained cold air in the central and eastern U.S. must come from a change in the jet stream pattern. That's exactly what computer forecast models are predicting from late February into early March.

The pattern change that may drive more persistent cold air into the Midwest, South and East during the last week of February and first week of March is a northward bulge of the jet stream over the North Pacific Ocean near the Gulf of Alaska, as illustrated in the map at the top of this article.

(MORE: Why Friday's Weather Map May Be Blank From Coast to Coast

The instigator for this anticipated jet stream reconfiguration is a climatological index called the Eastern Pacific Oscillation (EPO), which is expected to flip to its negative phase near month's end.

When the EPO is negative, a large ridge of high pressure, or northward bulge of the jet stream, sets up over the North Pacific near the Gulf of Alaska, favoring relatively mild temperatures in parts of Alaska. Downstream, a deep trough of low pressure, or southward dip of the jet stream, sets up over a portion of North America, opening the door for arctic air to flow southward into parts of the U.S. and Canada.

This time, rather than the cold dumping and locking into the West, as has often been the case this winter, it may dump and lock into the East for awhile.

Assuming this pattern evolves as forecast, it's likely that temperatures will be colder than average in the South and East as February comes to a close and March kicks off.

The latest long-range outlook from NOAA's Climate Prediction Center favors below-average temperatures across most of the Midwest, South and East late next week into early March.

A couple of storm systems might move through this cold air next week and bring snow or ice to parts of the central and eastern U.S. However, it's too early for specific forecast details.

If you're a winter sports enthusiast in the Midwest or East, don't give up hope on this winter yet. If this pattern change evolves as forecast, you should be able to enjoy some late-season skiing and snowboarding before spring's warmer temperatures arrive over the next couple of months.