Rivers across Britain burst their banks on Monday as Storm Dennis brought a second day of flooding.

Also on Monday, rescuers recovered the body of a woman who went missing after her car got stuck in water near a bridge over the River Teme near Tenbury Wells in Worcestershire on Sunday, the Associated Press reported. The recovery brought the storm's death toll to three.

In Germany, where the storm is named Victoria, at least 10 people have been injured in weather-related accidents after winds reached as high at 107 mph.

(MORE: Storm Dennis Is One of the Most Intense North Atlantic Storms on Record 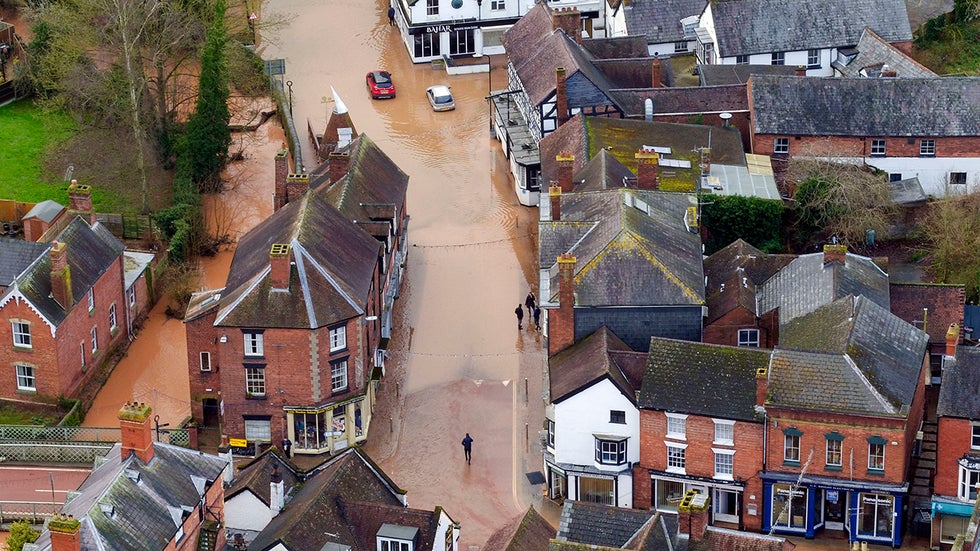 Floodwater stands in the streets of Tenbury Wells, England, on Monday, Feb. 17, 2020.
(Steve Parsons/PA via AP)

Evacuations were ordered across Worcestershire and Herefordshire. About 130 homes were evacuated in the Worcestershire town of Tenbury overnight, and officials said nearly all the roads in the area were impassable.

The Environmental Agency said the River Wye reached the highest level on record in Hereford, the Telegraph reported. Rescuers had to take people out of their homes in boats.

In Shropshire, which also was under a severe flood warning at one point, water from the River Teme flooded at least 30 homes have in Ludlow. Water reached the top of kitchen counters in one house, Ludlow North councillor Andy Boddington told the BBC.

Water poured into houses in the village of Lowdham in Nottinghamshire after the River Trent overflowed its banks, the Nottingham Post reported. About 60 homes were flooded. The village of Trowell was also hit hard by the flooding.

John Curtin, an official with the Environment Agency, tweeted that overall 420 homes have been flooded by Storm Dennis. He said that figure is "likely to rise." 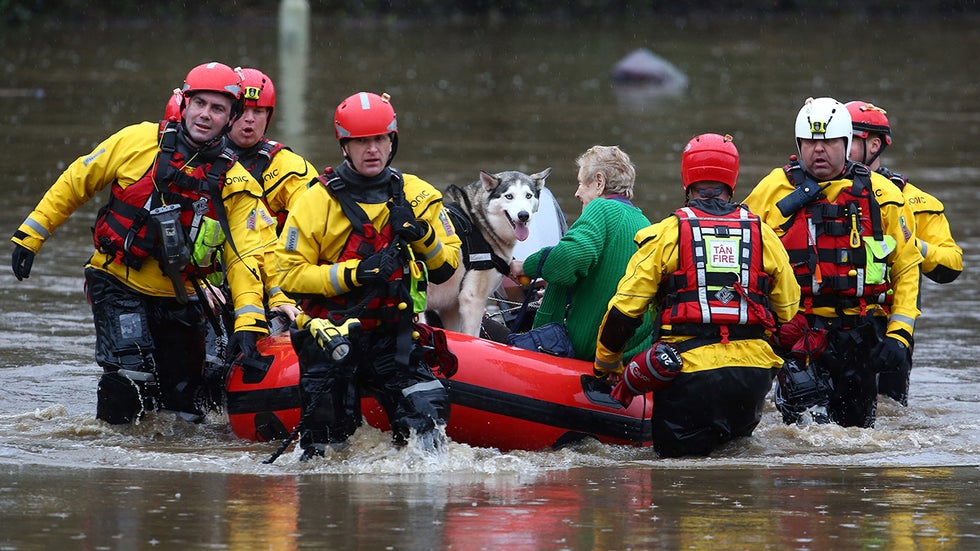 Members of the emergency services evacuate residents and their dogs from flooded houses after the River Taff burst its banks in Nantgarw, south of Pontypridd in South Wales on Sunday, Feb. 16, 2020.
(Photo by GEOFF CADDICK/AFP via Getty Images)

In Wales on Monday, residents began to try to clean up after flooding that Natural Resources Wales called "unprecedented." The south Wales valleys saw the highest water levels for more than 40 years over the weekend, according to Jeremy Parr, head of flood and risk management at NRW.

Many Trees Down in Germany

Fallen trees caused at least two accidents in Germany on Sunday and Monday.

Seven men were injured when their vehicle crashed into a fallen tree in Trippstadt, a town along Germany's border with France near Kaiserslautern, Deutsche Welle reported.

A woman and a man were hurt when their vehicle hit a fallen tree near the northeastern city of Rostock.

A gust of wind caused a 33-year-old woman to drive into a ditch in Schneverdingen, a town in Lower Saxony.

A commuter train with 67 passengers hit a fallen tree in Dortmund on Sunday. None of the passengers were injured.

About 20,000 customers in northwest France still had no electricity on Monday morning after Storm Dennis knocked out power to 45,000 homes on Sunday, Connexion France reported.

This was the second week in a row that northern Europe has been battered by severe weather. Storm Ciara killed eight people in six countries, including England, last weekend.