Will Spring Flooding in 2020 Repeat Last Year's Disaster? There Are Some Troubling Signs. 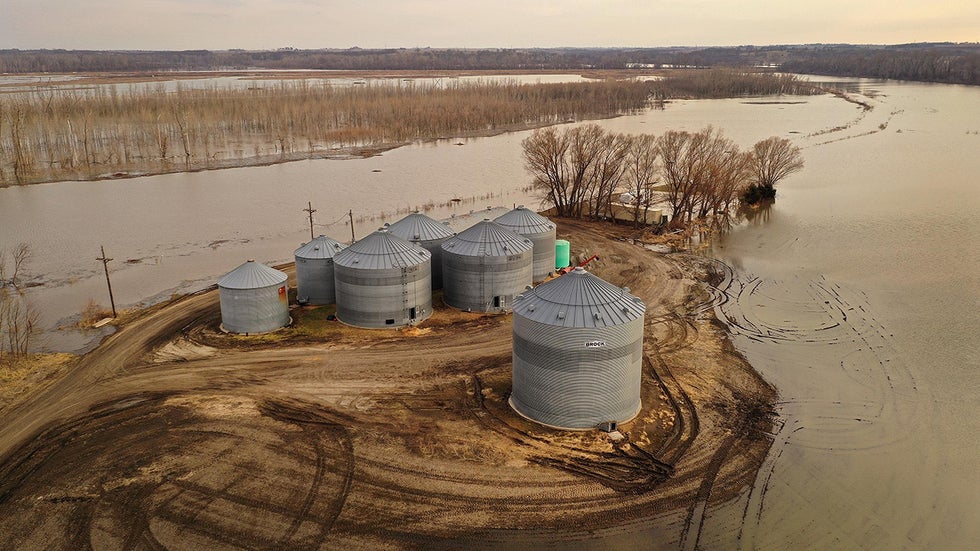 There are troubling signs spring 2020 could bring a repeat of widespread flooding in the nation's midsection somewhat reminiscent of last year's massive event.

Long-range flood outlooks issued Thursday by the National Weather Service North Central and Missouri Basin River Forecast Centers said there is an above-average chance of widespread flooding this spring along stretches of the Mississippi River, Missouri River, Red River and other tributaries in the northern and central U.S.

And along some stretches of the upper Mississippi River, Red River and James River, that flooding could reach major status. 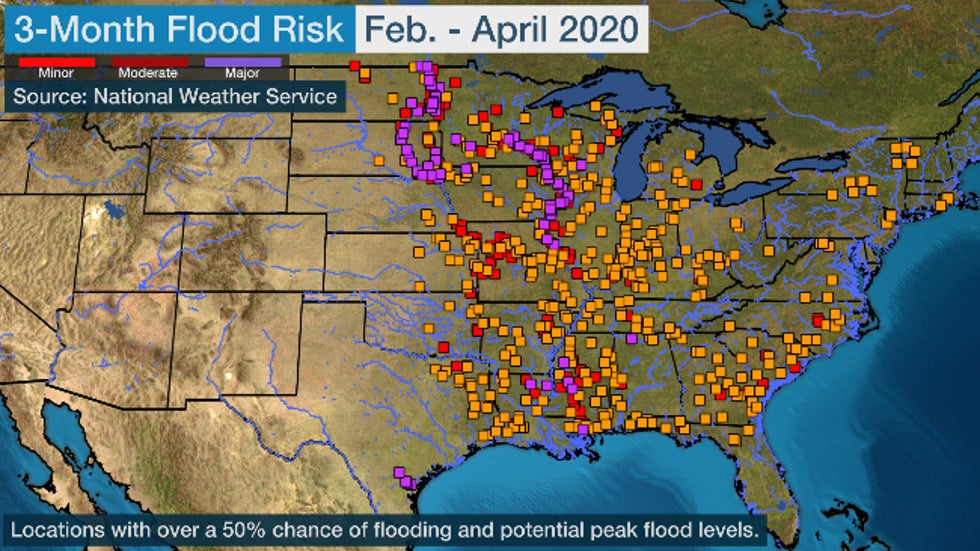 River gauges with an over 50% chance to see flooding through April 2020, with potential peak flood severity denoted by the colored squares.
(NOAA/NWS)

Flooding last year in the Missouri, Mississippi and Arkansas River basins were responsible for an estimated $20 billion in damage, according to NOAA.

Stretches of the Mississippi River were in flood for months and set flood longevity records from Louisiana to Iowa. Some locations along the Missouri River in Nebraska and Iowa remained flooded into December and also smashed longevity records. Repairs to broken levees are still ongoing. One South Dakota river has been above flood stage continuously since last spring.

Even if the flooding isn't as severe and widespread as 2019, it could still lead to more delays in crop planting, possibly in the same areas farmers struggled to plant or harvest last year.

Here are some of the factors in place now, and potentially through early spring, that have meteorologists concerned about the upcoming spring.

2019 was the second-wettest year in the Lower 48 states in 125 years of records, according to NOAA.

It was the wettest year on record in five Midwestern states: Michigan, Minnesota, North Dakota, South Dakota and Wisconsin. 2019 was among the 10 wettest years in almost every state in the Mississippi, Missouri and Ohio Valleys.

Troubling for the upcoming spring, August 2019 to January 2020 fall was the wettest August-to-January period on record in the Dakotas and Michigan and nearly record wet in Minnesota, Nebraska and Wisconsin, continuing that wet streak. 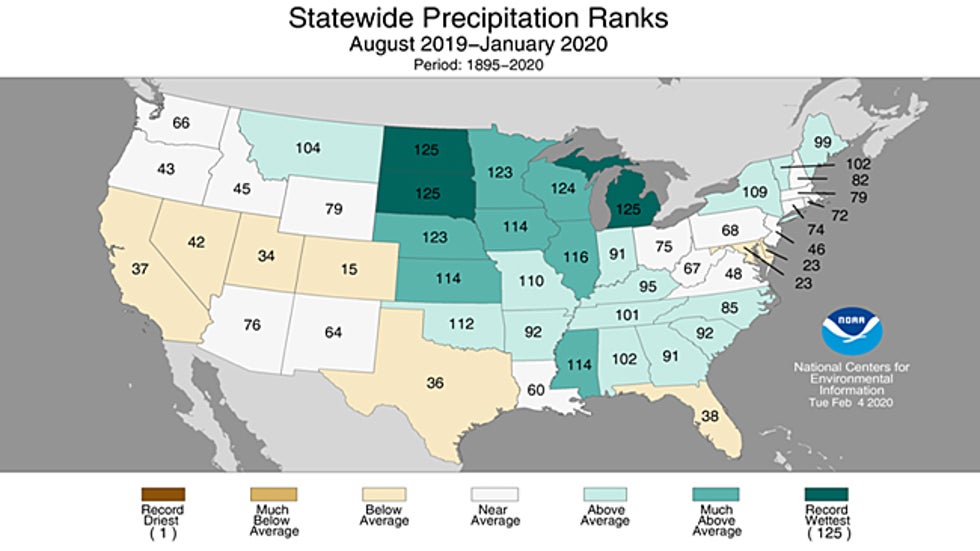 Statewide rankings of precipitation from August 2019 through January 2020. States in darkest green had their wettest August-to-January period on record in 2019-20.
(NOAA/NCEI)

One key to a heightened spring flood threat is soaked soil heading into winter.

Because of all that precipitation in 2019 and early 2020, soil moisture is in the highest 1% of values for mid-February over a massive area from eastern Montana and Wyoming through the Great Lakes and southward into the Tennessee and lower Mississippi valleys, according to NOAA's Climate Prediction Center.

The Weather Channel senior meteorologist Stu Ostro noted the similarity in large areas of this top percentile of soggy soil this February compared to one year ago.

Since the soil is so saturated, any rain or snowmelt can't soak into the ground. Instead, it will run off into creeks, streams, rivers, lakes and reservoirs, or simply flood fields or low-lying areas.

As winter's colder air moved in, that waterlogged soil froze in the northern U.S. But according to both the NWS RFC outlooks, recent mild temperatures and existing snowpack have limited how deep the soil froze, so that may not end up being a major factor in the spring flood recipe.

Rivers, streams, lakes and reservoirs in the Northern Plains and Mississippi Valley don't have room for much more water.

As of Feb. 12, a number of rivers, creeks and streams were running well above average for this time of year in the Plains, Missouri Valley, Mississippi Valley, Ohio Valley and East. This is shown by the light blue, dark blue and black dots in the map below from the U.S. Geological Survey. 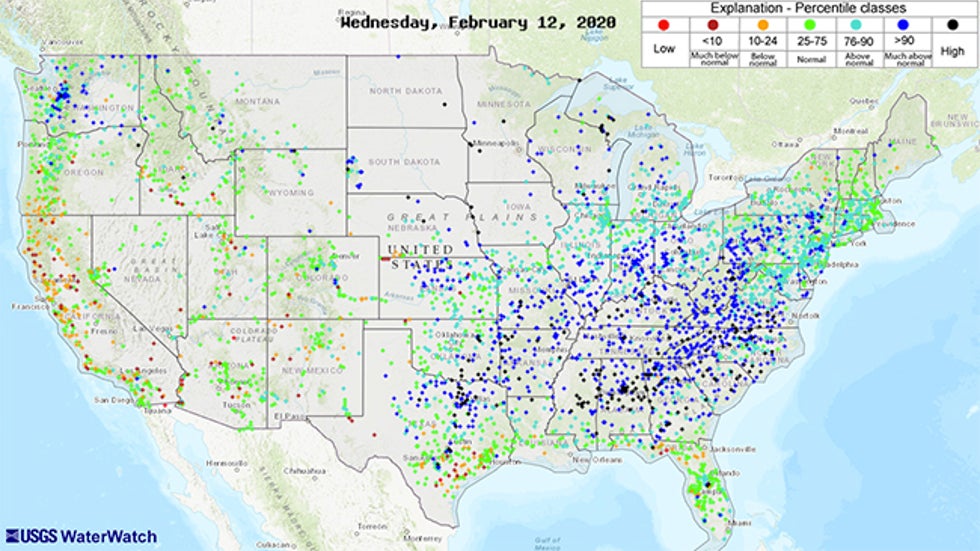 Streamflow status on Feb. 12, 2020, expressed as percentiles. Blue dots show river flow in the top 10% of historical values for the date. Black dots denote locations with the highest estimated streamflow on record for the date.
(USGS, NOAA)

Fortunately, the threat of ice jams may be lower this spring.

Farther south, over 200 river gauges were reporting river levels above flood stage from recent heavy rain in the Deep South and Ohio Valley.

Snowpack depth now in the upper Midwest and Plains is just a bit less than one year ago.

But for flood forecasting, the water content in the snow, or how much water will be released when it melts, is as important as the depth of the snowpack.

A heavy, wet snowpack is a prime ingredient for spring flooding.

Using an analysis from NOAA's Office of Water Prediction, the estimated water content of the current snowpack is fairly similar to one year ago.

Parts of the eastern Dakotas, Minnesota, Wisconsin and northern Michigan have 1 to 5 inches of water locked into the snowpack, with higher amounts near Lake Superior. This is generally above average in this region for mid-February.

Fortunately, the water content of the snowpack in the Missouri River Basin other than the eastern Dakotas is low, the NWS Missouri Basin River Forecast Center noted.

The aforementioned ingredients lay the foundation of the spring flood threat in 2020.

But there are several wildcards ahead that could make spring flooding a more major, widespread event like 2019.

One of the biggest factors is whether heavy rain falls during the snowmelt period.

The latest three-month precipitation outlook from NOAA issued on Jan. 16 expects generally a wetter-than-average February through April from the northern Rockies to the Great Lakes to the lower Mississippi Valley. 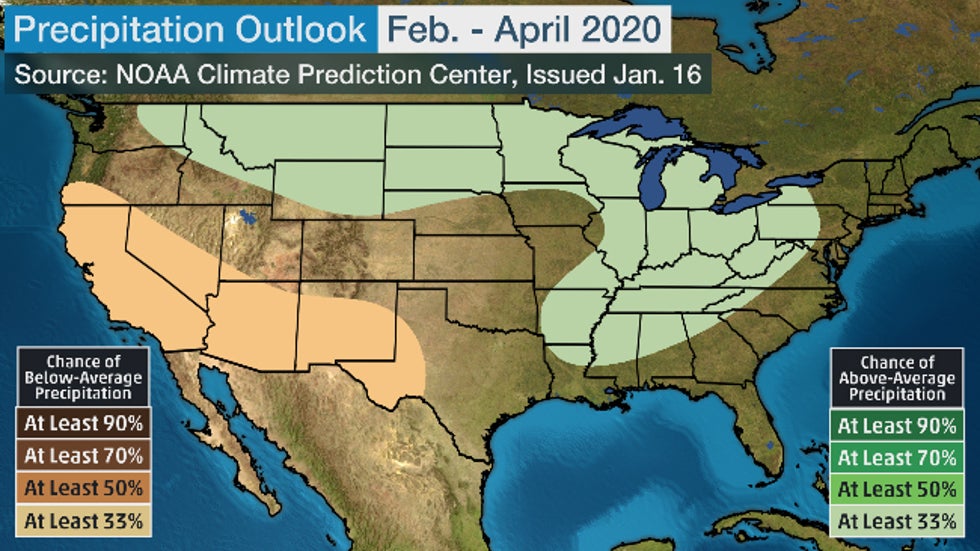 The next few months will be crucial in determining if 2020 will be considered another year of the flood.