A train pulling 96 cars loaded with ethanol was burning Thursday morning after being derailed by a rockslide in Kentucky.

The train derailed about 7:05 a.m. in Draffin, Kentucky, about 125 miles southeast of Lexington, according to a statement from CSX.

The rockslide derailed two locomotives and an unknown number of rail cars into the Big Sandy River near Pond Creek Road, the statement said. Some diesel fuel made it into the river, WYMT reported.

Two crew members were initially trapped in the derailed locomotive, the Associated Press reported, but they climbed out and waited for firefighters to rescue them by boat. 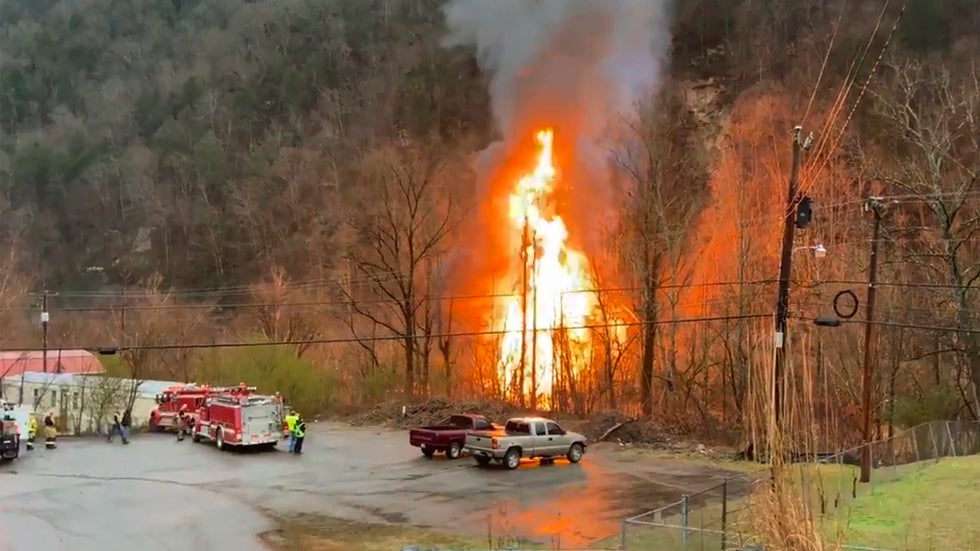 First responders respond to the scene of a train derailment in eastern Kentucky, on Thursday, Feb. 13, 2020.
(Russ Cassady/Appalachian News-Express via AP)

Pike County Emergency Management Director Doug Tackett said the two people were taken to a hospital in "pretty good shape," according to a Kentucky Department of Transportation Facebook post.

Kentucky State Police spokesman William Petry said authorities were not sure whether diesel fuel or ethanol was fueling the blaze, but authorities decided to let the fire burn itself out since it did not pose a public safety threat.

“Luckily the train wasn’t going very fast, so it saved them from a major disaster,” Petry said.

The National Transportation Safety Board said it was sending team of six to investigate the derailment.

Areas in Pike County have received 5 to 7 inches of rain this month, according to weather.com meteorologist Linda Lam.

The rockslide is just one of many problems caused by a line of strong storms moving across the South this week. The system has resulted in flooding, sinkholes, downed trees, power outages and wind damage.

In Morgan County, Alabama, U.S. Highway 231 was closed indefinitely Thursday morning after it was damaged by downpours this week, the Alabama Department of Transportation said.

All lanes in both directions were closed on a portion of the highway near Lacey Springs, about 70 miles northeast of Birmingham, Alabama. A crack developed in the southbound lanes of the roadway on Tuesday, WHNT reported.

Repairs were planned for Thursday, but the road shifted overnight because of more rain, the Morgan County Sheriff's Office said. Detours have been set up.

Damage was reported across North Alabama. A large tree fell on cars outside the Limestone County Courthouse on Wednesday night. There were three people inside one of the cars, but they were not hurt, WAAY reported.

In Lauderdale County, two radio towers were blown down and some buildings were damaged in Greenhill. Trees and power lines are down near County Road 33 and County Road 39 in Lexington, WAAY reported, and a barn was destroyed on County Road 375. The National Weather Service confirmed on Thursday that an EF-1 tornado had touched down in the area with winds estimated up to 100 mph.

A mudslide in Vicksburg, Mississippi, caused a backyard to collapse, WJTV reported. A second mudslide covered the parking lot of the Waterview Casino in Vicksburg.

The Pearl River, forecast to reach major flood stage this weekend, is already causing flooding near Carthage, Mississippi. In Jackson, Mississippi, water from the river cut off Westbrook Road and trapped residents at the end of the street, according to WLBT. Boat rescues were underway Thursday afternoon.

The Mississippi Highway Patrol said several vehicles, including seven 18-wheelers, hit a downed tree on Interstate 20 near the Bovina exit about 1:30 a.m. Thursday, WJTV reported. At least one person was taken to the hospital.

On Wednesday, officials in North Carolina evacuated a state prison Wednesday over fears of flooding as stormy weather continued to trek across the South.

About 700 inmates were moved from Neuse Correctional Institution in eastern North Carolina to more than a dozen other prisons across the state, WITN reported.

The nearby Neuse River is rising, prompting concerns that the prison could be cut off from adjacent roads, prison spokesman John Bull said.

In Mississippi, road crews were working to repair roads battered by flood waters and slides.

About 7,000 customers were without power in Mississippi late Wednesday afternoon, according to poweroutage.us.

In Louisiana, West Carroll Parish Schools were closed and officials in Rutherford County, Tennessee, said students would be released early ahead of potential severe weather.

On Tuesday, at least two dozen homes were damaged in Mississippi and four people injured on slippery roads in heavy rain that caused flooding in several states.

Dozens of schools delayed classes and drivers had to carefully pick their routes.

Many rivers and creeks were at or above flood stage. The Tennessee Valley Authority said on Tuesday that some of its rivers and lakes had received as much as 400% of their normal rainfall for this time of year, The Associated Press reported.

In Mississippi, emergency management officials were keeping a watch on the Oktibbeha County Lake Dam. In January, the dam was in "imminent" danger of breaching before pumping lowered water levels in the lake.

Officials said on Tuesday that the dam had again risen to the same dangerous levels. It had dropped some by Wednesday, but officials were still monitoring the situation as more rain was expected.

Officials replaced one of the six pipes that wasn't pumping enough water out of the lake, WCBI reported.

Water from the lake had covered most of a nearby campground.

Some residents in nearby Monroe County were forced to evacuate their homes, according to WTVA.

A levee in Leake County, Mississippi, did breach on Monday night.

The breach occurred in the city of Carthage and nearly flooded at least five homes. The inundation occurred along Minerva Street. After initially saying homes had flooded, emergency officials said that water had only reached yards, but residents of the homes were still evacuated.

The levee is on the southern end of the city of 5,000 located some 50 miles northeast of Jackson.

Officials were also keeping an eye on a dam that was in danger of failure in Yazoo County, Mississippi, where a lake in a subdivision was leaking around a culvert, according to the AP.

Some 25 homes had been damaged around the state and four people were injured in crashes on wet roads.

Part of U.S. Highway 80 in Warren County, Mississippi, was closed in both directions after a slab of roadway was washed out, the Mississippi Department of Transportation said. State Highway 16 in Leake County had to be closed because of flooding, MDOT said.

U.S. 441 between Gatlinburg and Pigeon Forge, Tennessee, had to be closed because of a rockslide, according to WATE.

Officials with the Great Smoky Mountains National Park said the slide contains 500 cubic yards of material in a pile 100 feet long and 70 feet high. The slide covers both northbound lanes.

A rockslide also closed one lane of U.S. 321 between Townsend and Wears Valley, according to the Tennessee Department of Transportation.

Earlier Monday, much of North Alabama was under a flash flood warning. Northwest of Bessemer, residents were evacuated near Valley Creek as homes and vehicles were flooded late Monday afternoon, according to local reports. 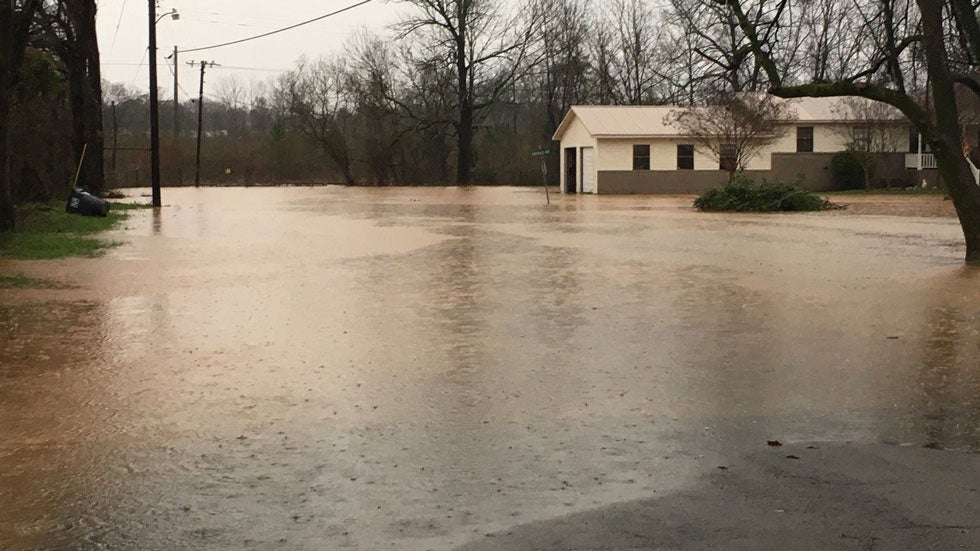 A road was covered in floodwaters in Hueytown, Alabama, on Monday, Feb. 10, 2020.
(Twitter/Hueytown Police)

About 1:30 p.m. CST, the National Weather Service office in Birmingham warned that "life-threatening" flash flooding was occurring in Tuscaloosa County.

Emergency officials said flooding had made numerous roads in the county impassable. Floodwaters washed out a portion of Upper Columbus Road north of Coker, Alabama.

Southeast of the city, flooding closed U.S. Highway 31 in Vestavia Hills. Nearby Sicard Hollow Road was also flooded. The Little Cahaba River, which runs through that area, had overflowed its banks, the NWS said.

The Police Department in Hueytown, southwest of Birmingham, said Virginia Drive and Opal Avenue were closed because of standing water. They reopened after about an hour.

In Homewood, the saturated ground could no longer hold some large trees.

Several school districts in northern Alabama announced delayed openings on Tuesday, according to WHNT.com. In North Georgia, Whitfield County Schools will also be closed on Tuesday.

Roads also closed in Mississippi because of flooding, as parts of the state received more than 5 inches of rain on Monday. In Yazoo City, Westview Drive was completely flooded, according to WJTV. Water was rising near Baptist Medical Center Yazoo, WLBT reported. The parking lot was already flooded.

In Madison County, a section of Rocky Hill Road washed out and a large pipe was sticking out of the ground.

Standing water surrounded radio station WLIN-FM in Kosciusko, Mississippi, according to Breck Riley, news and sports director at the station.