A City within a City 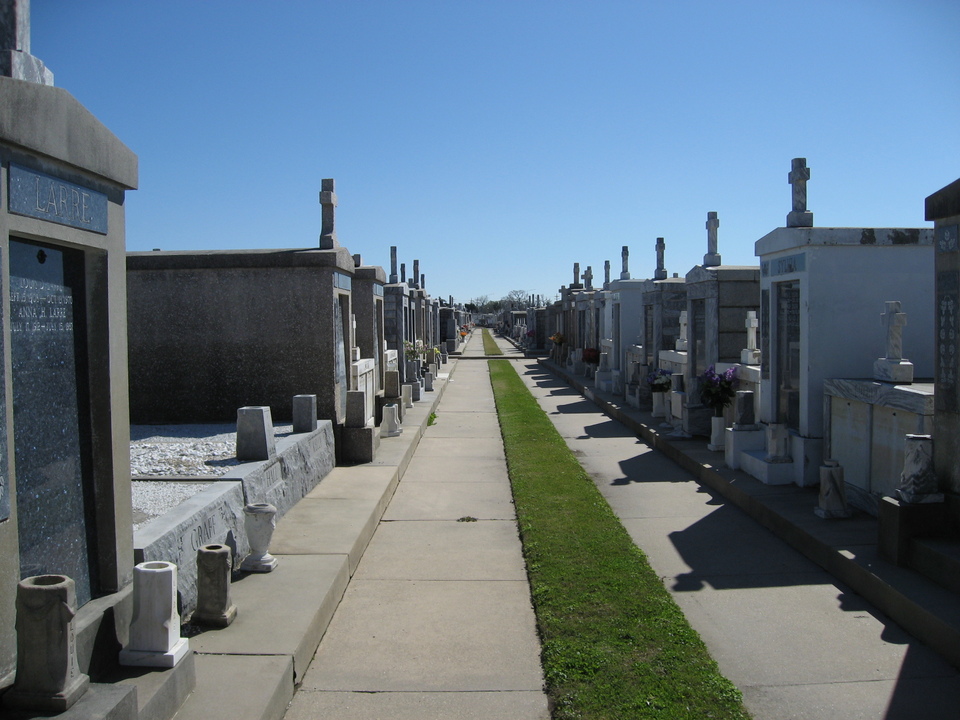 The cemetery was opened in 1852, and is located on City Park Avenue (formerly Metairie Road) in the Navarre neighborhood.

The cemetery has a number of impressive monuments and sculptures.

Confederate supporter and resister of Union occupation William Bruce Mumford, who was hanged for tearing down a United States flag during Union Army occupation of New Orleans during the American Civil War

Union Army Brigadier General and Brevet Major General William Plummer Benton, who was Collector of Internal Revenue in the City of New Orleans after the Civil War and died of yellow fever in 1867 
My Grandparents on my mothers side are Buried in Greenwood just off Canal Blvd on Orange Street within the Cemetery. Each Row has a street name to navigate the cemetery.Its also a nice place to teach someone to drive.

My parents are buried in the Mausoleum on the North side of the Cemetery. Dad was smart and bought High on the 5th Tier at the top. 5 feet of water was common after Katrina in the cemetery.

Caring for the burial needs of New Orleans since 1852. Centrally located at City Park Avenue and Canal Boulevard. On-site funeral home. Landmark monuments. Historic tombs. Modern Mausoleum. Affordable pricing. Owned by the Firemen’s Charitable & Benevolent Association. These are just a few good reasons why Greenwood is the most popular cemetery in New Orleans.

Click on the arrow inside the video box to take a quick tour and discover why Greenwood Cemetery & Mausoleum is still the best value in town.

Death of the Dream

Death of the Dream

With the recent calamity of the Government Shutdown and the looming debt ceiling fight, one thing has become crystal clear: we are witnessing the Death of the American Dream.

In the past we believed all things were possible, there was absolutely nothing that Americans couldn't accomplish. In the '60s, President Kennedy said we would put a man on the moon by the end of the decade and few doubted the possibilities. After all, America was always capable of great and glorious accomplishments.

We were the Dreamers. It was instilled in the American psyche, American ingenuity. We led the world in research, medical or scientific, our engineering feats astounding the world. We had a government that participated, encouraged, and supported this mighty economic engine. We had a middle class that was the envy of the world. Things were good, but they would even be better in the future. Our education system supported all economic classes, and we had fluid upward mobility. We made the impossible possible.

When the Japanese bombed Pearl Harbor, the Naval Marshal General Yamamoto is rumored to have said, "I fear all we have done is awaken a sleeping giant." And he was right. Within three years we built the strongest, most advanced military on the face of the earth.

We believed in Democracy, in fairness. We believed in our Government. We disagreed, argued, but we never doubted our form of Government, or the Government itself. Now a harsh reality sweeps the land. Our precious form of government is dying. Democracy is dying. A minority can now control the majority. Fanaticism that we thought applied to less progressive countries is now homegrown. In the past we didn't always agree, but we accepted laws that were passed as the law of the land. We might fight to overturn some legislation within the halls of Congress, but a minority never took it upon themselves to deprive millions of Americans their jobs, stopping their ability to earn a wage. Never were we this destructive because a minority was opposed to a piece of legislation. And so our Democracy grinds to a halt.

We might get past the debt ceiling crisis, the government shutdown, but the future of America is clear. We are no longer the wonder of the world. We exposed our ignorance, our ugly insensitivity. We are a petty people with a government that has ceased to function. The great achievements are part of yesterday. The future is a dark place.

We have proven a Democracy is a fragile form of government. And we have shown the world how easy it is to kill it.